Wild West - It's A Hanging Day.

A few pics from a recent Wild West game run by Robafett.

The setting is Dead Dog Gulch, a small backwater town somewhere in the depths of Inconsequence County.

A local ruffian going by the moniker of 'The Silver Kid' has finally been caught and is facing the gallows. 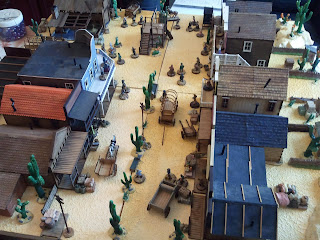 The Sheriff of The Gulch, Morgan, and his deputies, Tightson, Primcup, O'Ryan and Coburn are intent on having a hanging today and the local crowd has gathered. The Reverend Stickler reads scripture to the crowd as they wait. 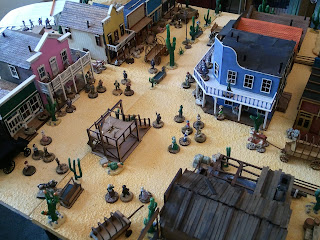 Little know to the Law, two other groups have arrived in town over the last day. First, The Black Gun Gang, led by Jonas 'Black Gun' Quinn, with his surly mob, Bo 'Sonny' Stocks, Luke 'Red Beard Junior' Stocks, Henry 'Ratface' Harrison and Asumpta 'Princess' McCoy (nee Quinn) have turned out to make sure nobody tries to save 'The Silver Kid' from his well earned fate...he was the varmint responsible for gunning down 'Little' Joey Hamstringer. Most of the gang are waiting in the Strawberry Brothel but 'Princess' and 'Ratface' lurk outside near the gallows. 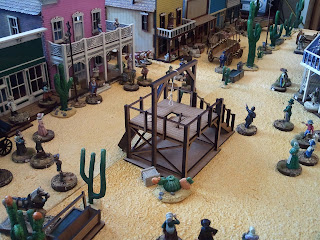 Also in town are a posse hired by 'The Silver Kids' pop (gawd knows what a b'std that fella is...) to get him the hell out of Gulch and back to the safety of the Ranch. Joshua Tremble, Lem Wenkleman, Sam O'Callahan, Bart McKendry and Bob 'The Kid' Jenkins make up this group of 'innocent' ranchers. 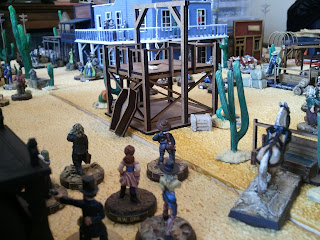 The scene is set...the Sheriff and his deputies bring out 'The Silver Kid' from the jail just down the street...meanwhile, the other interested parties start to move into position... 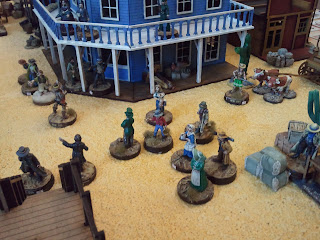 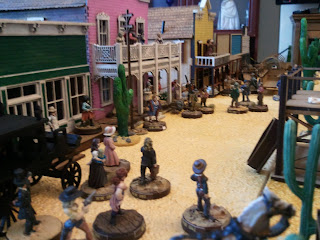 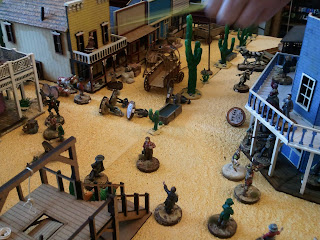 Well...as can be expected, absolute carnage ensued and a whole lot of poor civilian folk met their maker!

For a full write up, pop over to The Streets of Inconsequence where you can find lots of lovely photos.

All figures, buildings and terrain are from Robafett.

Rules used were his modified version of The Rules With No Name.

Email ThisBlogThis!Share to TwitterShare to FacebookShare to Pinterest
Labels: County of Inconsequence, Rules with No Name, Wild West