Dug out my old Call of Cthulhu miniatures, mainly by Grenadier but a few from an old range by - Metal Magic called "Dunwich Detectives". I have about 36 human figures from a wise old professor to a young flapper. There are quite a few superb sculps in among them and I particularly like the 'Dandy with Automatic.'

I also have a mixture of their 'monster' range including some nice Deep Ones and a rather scary Dark Young of Shub Niggurath.

Not sure about the Grenadier ones but you still seem to be able to get the Metal Magic ones em4 Miniatures - Dunwich Detectives.

I had painted most of them but the majority are not that well done to be honest! I took a few photos of some of the horrors though as they are a little more passable... 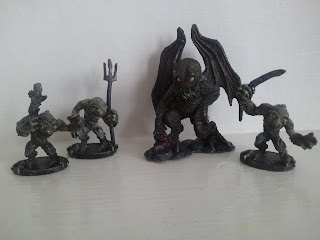 A Star Spawn of Cthulhu and some degenerate Deep One allies. 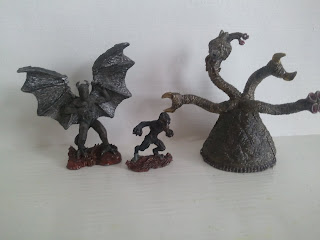 A Nightgaunt, a Ghoul and and a Yithian. 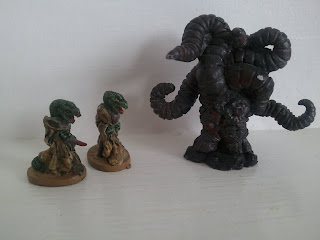 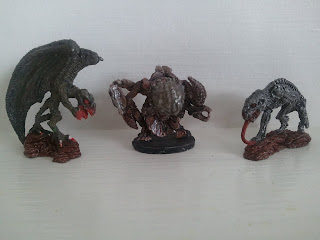 A Byahkee, Mi-Go and rather sorry looking Hound of Tindalos.
﻿Unfortunately I seem to have missed a few classics in this range, including a couple of Elder Things (would be really useful for my "Beyond the Mountains of Madness" game) a Nyarlathotep, a Tsathoggua and a Hunting Horror.

Run away, it's Nyarlathotep!!

A Hunting Horror...
﻿
Check out Grenadier Lost Minis Wiki for many more pics.
﻿
Posted by wardy-la at 17:25