VBCW - The Battle of Hockley Hill.

The Battle of Hockley Hill.

Battle Report.
Members of the Tilbury Dockworkers Collective had gathered under the instructions of Voenkom Ron Harris (military commissar) following reports of a gathering of a small force of BUF militia and Auxiliary police grouping near a small deserted farmstead north of Hockley. Small arms and a clutch of Lewis light machine guns were handed out to the brave but untrained men for their first taste of combat against the fascists.
On arrival, the BUF force appeared to be holding the ruined farmhouse on an open piece of ground with small tree-lined areas surrounding this. To the south-west of this sat another burned out farmhouse and Politruk Merrill decided to advance a third of his designated force towards this to secure a covering perimeter.
Starshina Watkins was ordered to move to the tree line south of the central farmhouse and open fire upon it to suppress those BUF/Auxiliary forces inside. 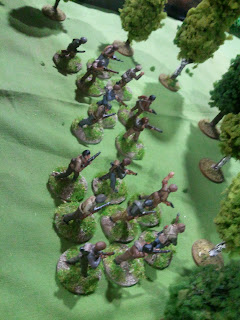 Brave men of the TDWC march to the tree line south of the farmhouse.


Starshina Grover was to line his force across the south-east, taking cover from the nearby hedges and low lying hills and to make a steady advance to the right flank of the farmhouse to encircle those within. 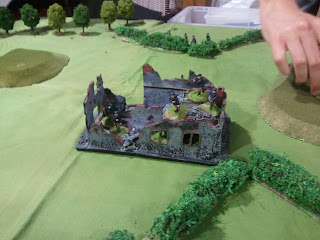 Central farmhouse near ‘Hockley Hill’ with BUF/Auxiliary forces inside. Their command group can be spotted further north.

Starshina Watkins opened fire upon the farmhouse causing some problems for the defenders but received heavy return fire taking several casualties. Part of the unit took cover behind a low hedge leading up to the east side of the farmhouse but they were severely hit in their flank by BUF troops armed with a Lewis gun from a copse of trees just to the east of the farmhouse. Despite their brave efforts, they were forced back to the tree line and eventually had to retreat to the safety of the forest behind them. 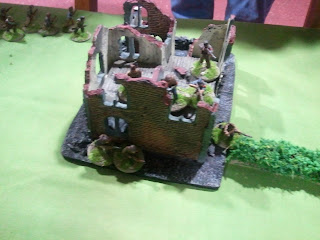 Loyal soldiers at the southern farmhouse.

Meanwhile, the section under the command of Politruk Merrill finally made it to the southern farmhouse after suffering sustained fire from the BUF and Auxiliary forces at the farmhouse and a command group hiding near another copse to the north. 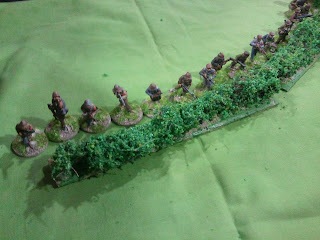 TDWC take cover behind a hedgerow.

Starshina Grover was at this moment having trouble motivating his troops. They held a strong position to the south-east and became aware of another BUF/Auxiliary unit lying in wait in a small copse near the farmhouse just north of them over a low hill.
On hearing the sound of machine gun fire and the screams of their comrades they were eventually motivated to move forward to the bottom of the hill but struggled to get further as the top was still under suppressive fire. 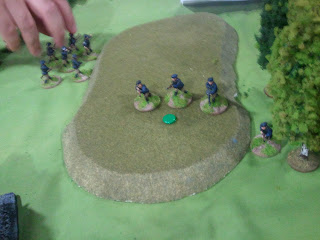 As the TDWC gradually advanced, taking heavy fire and casualties all the time, it suddenly became apparent that the assault had caused the fascists to waver. The unit holding the central farmhouse had fled the building and were making their way north to join their command group to the north! The BUF/Auxiliary Lewis gun on the hill continued to fire, covering their retreat across the open ground. 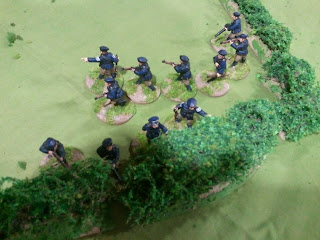 Finally, as the BUF/Auxiliary forces began to consolidate to the north, the final push by the TDWC began. The militia under Starshina Grover were still bogged down at the foot of the hill to the south-east and struggled to advance. The men to the centre under Starshina Watkins made one last desperate charge across the open ground towards the farmhouse. Despite taking withering fire and many casualties they reached the ruin and secured it. 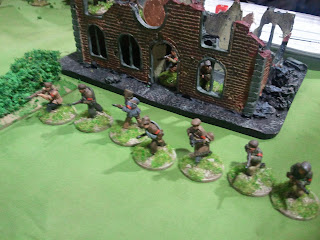 The remaining men at the southern farmhouse broke from their cover in a dash to more hedgerows just north of this. Several brave men lost their lives (and some cowards ran from the battlefield) but the advance appeared to be a success!

The fascist forces (under the command of Captain Robertson “Bob” A. Fett) were now seemingly all on the retreat – was this a victory for the Socialist cause?

As the remnants of the TDWC secured the area it soon became apparent the BUF/Auxiliary plan was all a ruse. The farmhouse held no real strategic value – the fascist forces were merely attempting to draw as many men of the socialist collective from elsewhere and kill or wound as many as possible, with the intention of depleting morale and troops available for later battles.

Was all this simply a diversion by Mosley to occupy socialist men as he planned a bigger assault elsewhere? Only time will tell…
Posted by wardy-la at 10:03