A Touch of Fantasy...Brother Thomas.

Decided to add a little bit of fantasy stuff to this blog as I have no where else that seems appropriate to put it! Might dig out some old fantasy wargames notes from my early Warhammer Fantasy Battle days and perhaps even some RPG stuff too.

Anyway, onto one of my earliest Citadel figures from my collection...


'Brother Thomas' is an old Citadel Miniatures chap I have owned for many years. I bought him in about 1982 for 40p and he has graced many wargames tables and RPG's over the years. He has certainly faced far worse things than one or two angry Danes with axes. Battles that spring to mind include the legendary 'Bloodbath at Orcs Drift', the 'Nightmare in Blackmarsh', 'The Battle of Dalion Pass' (the only game I am aware of thats had intelligent baboons fighting on one side!), 'How Red Was My Valley' (regarding the case of the missing Count von Bulow) the defence of the Principality of Francovia and the 'Return of Martin the Liche-Lord and the Wars of Spite'. He was always somewhere on the fringes of the action, even if it was an old dwarven stronghold or a mission near an elven fortress. Other characters involved included the dwarf lords Clando the Bane and Torak Dragonhelm IX (bearer of the Runesword Casmakis), the 'Scarlet Plumes' (a kind of roaming police force made up of Runequest miniatures), Harboth & the Black Mountain Boys (Citadel Orcs before they went really spikey), Mengil Manhides company of Dark Elves and even a Slann raiding party after slaves and booty. Hmmm, last one sounds familiar...anyway, enough reminiscing! 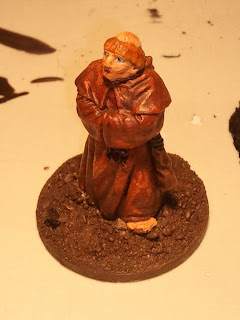 Brother Thomas.
(Re-posting this from Gjallarhorn, my Viking blog)
Posted by wardy-la at 01:12