Been digging out a few Runequest and generic fantasy type miniatures in the last few weeks (in between trying to finish a stack of Vikings and Saxons, see Gjallarhorn and various WW2 folk, see A Project Too Far) so I thought I would post an update on some of the figures I have been looking at.

Scorpion men are a chaos breed native to Glorantha and left over from the Great Darkness. They are often found in desert areas and sometimes small mountain villages. Their rigid society is based on servitude to Queens, who breed for the race. Scorpion men are known to make their living by trading or hiring out their services as mercenaries to employers willing to look past their chaotic nature.

Kudurru 'Boundary' Stone.
In mythology, Scorpion men are featured in several Akkadian language myths, including the Enûma Elish and the Babylonian version of the Epic of Gilgamesh. They were also known as aqrabuamelu or girtablilu. They were first created by the Tiamat in order to wage war against the younger gods for the betrayal of her mate Apsu. In the Epic of Gilgamesh, they stand guard outside the gates of the sun god Shamash at the mountains of Mashu. These give entrance to Kurnugi, the land of darkness. The scorpion men open the doors for Shamash as he travels out each day, and close the doors after him when he returns to the underworld at night. They also warn travellers of the danger that lies beyond their post. Their heads touch the sky, their "terror is awesome" and their "glance is death". This meeting of Gilgameš, on his way to Ūta-napišti, with the Scorpion-folk guarding the entrance to the tunnel is described in Iškār Gilgāmeš, tablet IX, lines 47-81. 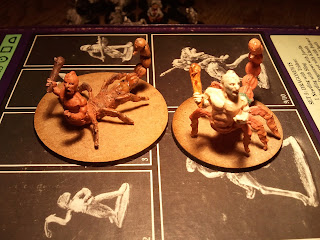 Citadel Runequest Scorpion Men.
These are two of my favourite figures, a couple of nasty looking scorpion men. These are from the old Citadel Runequest range and have an unsettling look to them. I have raised ones legs, as if scuttling along or rearing up to attack, whilst the other is close to the ground. Unfortunately both had broken tails but it was nothing a little green stuff and superglue couldn't sort out. I have shaded them in slightly different colours to individualise them a little and a friend has suggested I remove one of their clubs and replace it with a spear to further enhance their characters. Once I have become brave enough to modify one of them I will finish the paintwork. I have not decided on a base yet but will probably opt for the larger of the two in the picture. I have searched around for more to join these two but they are rare. Other miniatures companies that look to produce versions of scorpion men include slightly more humanoid ones from Fenryll Miniatures, a really striking one from Reaper Miniatures, more monstrous ones from Iron Wind Metals and Rapier Miniatures also do a small range with a nice Scorpion Queen. There also appeared to be a scopion man mini from Ral Partha but I am sure these are lost in the annals of time. ShadowForge also do a nice selection of fantasy 'Egyptian' style scorpion-women warriors in their 'Light Temple' range. 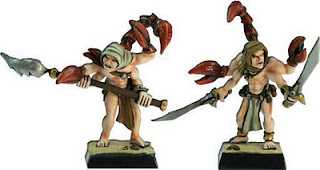 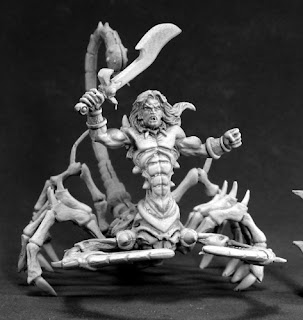 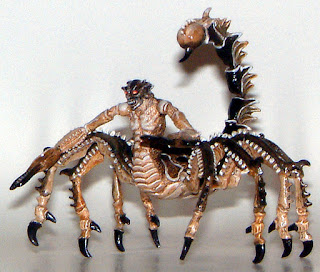 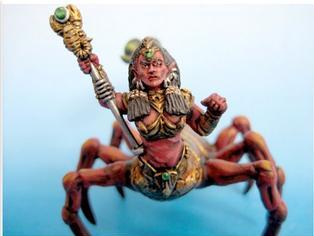 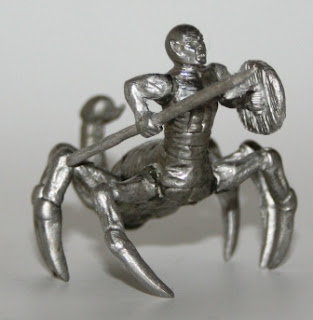 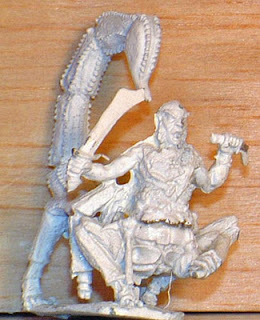 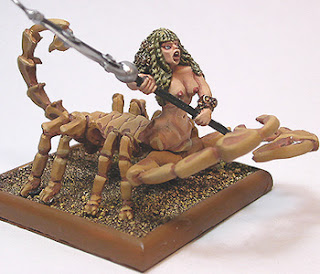 ShadowForge.
For some interesting notes on the Gloranthan cult of Bagog and the scorpion-folk have a look at the Lhankor Mhy Research Library.

Scorpion men also feature as powerful myth units for the Egyptians in the game Age of Mythology. Dungeons & Dragons features centauric scorpion-men called Stingers, normally found in desert locales and devoted to gods of the waste, often those reflecting the Pharaonic or Babylonian pantheons. In Warlords Battlecry III, scorpion-people are the primary servants of Melkor, the Lord of Famine. In The Mummy Returns, the Scorpion King is shown as a scorpion-man, perhaps the less said about that the better though... 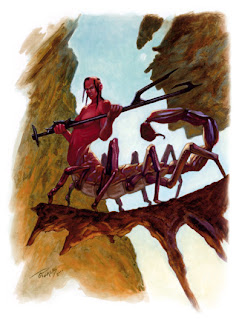 Love your take on Scorpion men. I saw the reaper one, it looks quite heroic indeed. I also have purchased a few scorpion men from an Australian company, the name of which escapes me, but I'll get it later. I also did a small mod using a giant scorpion that I got from e-bay and a naked fanatic torso. Just the right look :)

Just started a classic Glorantha RQ campaign, for the first time since I was a young 'un. Used some sword and mace snakes and a couple Broo last game, and this week am maybe going to throw some scorp men at them. Kind of wanted to do the Gringles Pawnshop scenario this week, but I think we still need to shake the combat rules crunch muscles out a bit before delving into more complicated situations.