Intelligent Major Race derived from Ancient genetic manipulations of Terran carnivore/chaser stock, apparently dating from approximately the same time that Humaniti was scattered to the stars.
Inhabiting a region coreward of the Imperium, the Vargr were for years a puzzle to Imperial xenologists. The Vargr biochemistry and genetic makeup are almost identical with a number of terrestrial animals, but differ radically from most of the flora and fauna indigenous to Lair, the purported Vargr home world. Researches during the early years of the Third Imperium concluded them to be the result of genetic manipulation of transplanted Terran animals of the family Canidae, almost certainly of genus Canis. The obvious conclusion, supported by archeological evidence, is that the race known as the Ancients was responsible. 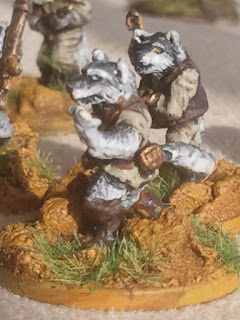 Physical Characteristics
Physically, the Vargr are not very impressive. The typical Vargr is about 1.6 meters in height and weighs approximately 60 kilograms. They are upright bipedal carnivores, rear limbs digitigrade, with hands very similar in size and appearance to those of a human, although there are significant internal differences. They have approximately the same physical parameters as humans and are able to use the same equipment without modification or additional instruction.
On the average their reactions are slightly faster than those of the typical human, but individuals vary widely. The Vargr senses of smell and sight are superior to those of humans. 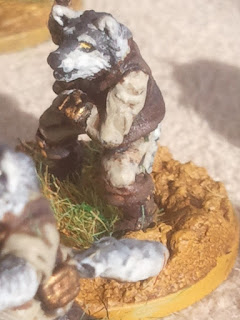 Government
There is no central Vargr government; indeed, there is no governmental type that can be said to be "typically Vargr". Every conceivable form of governmental organization can be found somewhere in the Vargr Extents. The only cohesive force in the Extents is a fierce racial pride which causes a slight tendency towards racial cooperation. The higher the level of the Vargr government, the more unstable it becomes because of the difficulty of obtaining consent of all Vargr involved. 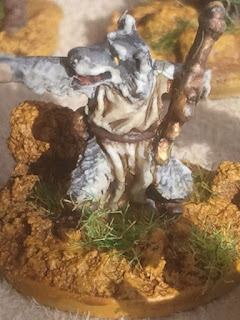 Society
The key elements shaping Vargr societies are a very strong centrifugal force resulting from an emphasis on consensus and informal lines of authority, and an equally strong centripetal force resulting from a deeply ingrained family-clantribe-nation loyalty.
Centralized authority is extremely limited at the upper levels of Vargr society, and action is based on broad coalitional concerns, with a constant splitting and rejoining of dissident factions. Traditionally, this has made it very difficult for more centralized and organized societies such as the Imperium to deal on a meaningful basis with what passes for Vargr states. The Vargr have little respect for formal authority, decreasing as that authority becomes more remote. Vargr generally have more respect for more informal authority figures, and are more likely to obey superiors who are better known to them.
The Vargr have an intensive racial pride and are easily insulted. They are prone to enter into fights without regard to possible consequences. Vargr social organization is difficult to characterize in Terran terms, but can be most closely compared to the Dakota Sioux of North America in the 1800's AD, if the analogy is not pressed too far. Even among the most stable Vargr governments, a highly charismatic leader can attract followers for almost anything. The neighbors of the Vargr are constantly the subject of impromptu raids and scattered piracy by bands of Vargr (totally without government sanction, of course) who have been talked into a raid, a battle, or a war by a charismatic leader. 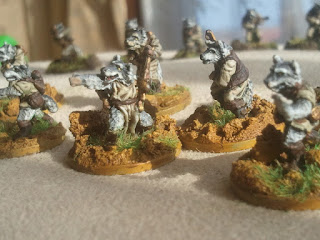 Vargr in the Imperium
While only a few planets populated completely by Vargr exist within the Imperium, there are millions of Vargr citizens of loyal subject planets. Additionally, Vargr adventurers, criminals, mercenaries and traders can be found throughout the coreward reaches of the Imperium. 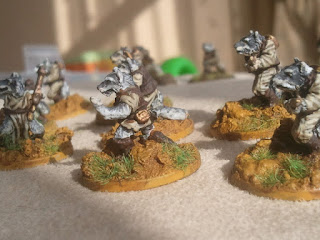 Text from The Traveller Wiki﻿. Minis are from the old Citadel Traveller range and painted by Rob Affection.
Posted by wardy-la at 18:45

Nicely painted. I have always loved the Vargr. Even though they are just anthro wolves, Traveller made them so much more.