I have not been progressing very far with the fantasy painting as have been concentrating on Dark Ages (Gjallarhorn) and WWII (A Project Too Far) but I did manage to get this awesome chap done for our mooted Mordheim game. 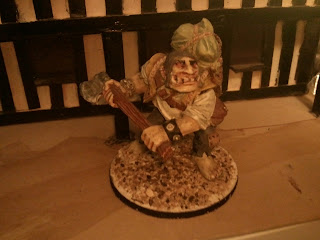 As is common with me I still need to finish the base (I get so bored when I get to the finishing touches...) but I am pleased with the job so far. An excellent figure with lots of character - I just hope I can afford to use him in my warband!
Recently got hold of the excellent Mordheim sourcebook 'Empire in Flames' and have been thinking of getting a Beastman warband together for it. Still want to do the Dwarf Treasure Hunters but as I have a few Beastmen already done (and they are cool!) I am thinking of painting up a few more of my old Runequest Broo to swell their infested ranks. 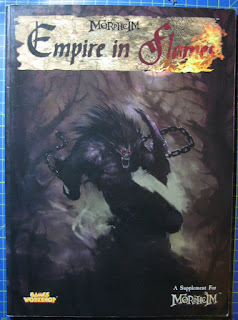 Would a Dwarf or Beastman warband actually hire an Ogre though... 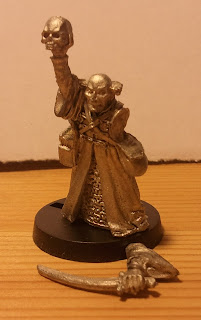 Zombie-Master has been working on various buildings for Mordheim and has a least two warbands ready to go, one I believe is Empire and the other Undead. For this reason I decided to gift him the figure above as it was one that he never got hold of to complete the set. Another friend, Rob A, has a completed Skaven warband. I really should catch up.