Doctor Who foes: Some Cybermen. 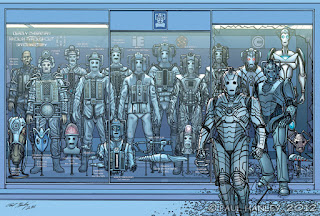 Cybermen were a "race" of cybernetically augmented humanoid. They varied greatly in design, with different factions throughout time and space. The two major groups, from which all other known versions derived, were the Mondasian Cybermen, which originated on the planet Mondas – Earth's twin planet in the Doctor's Universe – and the Cybermen created by Cybus Industries, which originated on Earth in an alternate universe.


Despite the different origins, there were similarities between both groups of Cybermen, and there were groups that shared the characteristics of both. For the most part, they lacked individuality or names. Cybermen had no emotions and viewed them as a weakness. They frequently attempted to physically and mentally re-engineer humans and other humanoids into Cybermen, via a process called "cyber-conversion" or "upgrading".

I have several Cybermen on the workbench - about 16 Earthshock, 10 Invasion plus a few random others, including a Telosian and a Tenth Planet figure. To be honest, I get a little confused with all the variants!

Poor photo below showing some of them...

Invasion Cybermen are my favourite - possibly because of the cover of the Target Novelisation, which was one of my first introductions to them.

Just need a sewer so I can game the Invasion!

Hi! Decided to have a read as I am always interested in people's Dr Who projects and, wow, total surprise seeing you link to my blog! Thanks for that and I am pleased you found it useful!

Thantsants - agree with you there, the Invasion cybermen are my faves too. They are the classic look for me. Ainsty do a good sewer set :)Loving your Shrine of Rigg project btw.
Chris - thanks Chris, I enjoy your blog, especially the 'Master / Cybermen' team up and am eagerly awaiting your next Doctor Who instalment!

Thanks, I'm pleased you enjoyed it. My friend and I certainly had fun playing it! I've let my Doctor Who figures languish a while unfortunately. I'll have to dig them out soon!