A few of the Doctors adversaries...

The Silurians, also known as Earth Reptiles, Eocenes, Homo reptilia and Psionosauropodomorpha, were a species of Earth reptile. Technologically advanced, they lived alongside their aquatic cousins, the Sea Devils. Unlike other species, Silurians showed an important intraspecific variation (vast differentiation between breeds), such as the number of eyes, the formation of their pupils or the colour of their skin.


The Silurians were generally a peaceful race. Their highest laws forbade outright warfare except for defence. There was also great importance placed on the species' pure eugenics, which was believed to be their most important principle and most sacrosanct belief. Breeding between a Silurian and a Sea Devil was considered a crime punishable by death. The eggs of such a union were usually crushed and the parents executed.

The Silurians were generally led by a Triad, three Silurians who ruled jointly. These Silurians came from different backgrounds and controlled different professions, such as the military and the scientists. Silurians were also split into different tribes. The majority of Silurian warriors appeared to be female, just as the females were the more aggressive in some species of lower reptile.

Bok was a grotesque statue animated by Azal's power and used by the Master to gain control of the residents of Devil's End and resist attack. After the Master was defeated and Azal and his spaceship were destroyed, Bok ceased to be animate and was destroyed by UNIT.
Bok had glowing red eyes when animated and was short in stature. He was still a powerful force to be reckoned with. He could vapourise objects and people instantly and resist injury, including being blown apart. However, he did have a few significant weaknesses such as being afraid of iron, and could be mollified by Venusian lullabies.
Gell guards were blob-like creatures created by Omega, trapped in a black hole domain made of anti-matter. They had the ability to travel from Omega's anti-matter universe into that of matter. An advance guard appeared in the form of a shapeless jelly-like blob.

Others appeared more solid and could use their claws as weapons to fire blasts. They were immune to gun and rocket fire. Under Omega's command they attacked UNIT HQ. They killed a number of soldiers. They captured the Third Doctor and his friends. They took them to Omega's lair.
Haemovores were a species of vampire-like humanoids who evolved from humans. They fed on the blood of humans, though they could also survive in sea water, which had a similar salt content. The Haemovores had enormous strength and power, and could climb sheer surfaces with ease. They were resistant to bullets, and could only be killed by a stake to the heart. Also, Haemovores had razor-sharp claws, which they used to kill people. Haemovores could even weld metal with their hands, and older Haemovores built up armour made of metal they collected and melted together. The Haemovores could be stopped with a psychic barrier, which in humans was created by the mental processes associated with strong faith; the Doctor (and, presumably, other Time Lords and psychically-aware beings) could create this barrier at will. In the presence of the barrier, the Haemovores often responded with ear-splitting shrieks.

Haemovores were known to only hunt in the fog or mist. Whether they created this fog themselves, or simply hunted when the time was right, is unknown. The Haemovores communicated with each other telepathically. This could be detected by telepathic humans. They could also telepathically control humans, making them easier to feed on. They were all controlled by Ingiger, who could kill them with a thought.Partially transformed Haemovores, about to advance upon their prey.

The Haemovores started life as humans, who were changed by other Haemovores. At first, the only signs of change were pale skin, large red lips and sharp claws. They still had their minds and memories, but a more feral mindset. As they aged, their appearance started to change: Their skin grew slimy and wrinkled, their eyes were swollen shut and their mouths turned into suckers for feeding. After a century, they were completely transformed into Haemovores.

After being killed, they would rapidly decay into charred bones and slime.
Robomen were humans converted by the Daleks into wholly obedient slaves during 2025 and the 22nd century Dalek invasion of Earth. The Daleks captured prisoners and operated on their brain in a surgical procedure called the Transfer, fitting them with large, helmet-like headsets. The Daleks' mind control technique was unstable, and the Robomen would often go insane and commit suicide.
Robomen also featured in the theatrical version of this story "Daleks - Invasion Earth 2150 AD" and are the ones displayed here.
Daleks were the armoured, mutated descendants of the Kaleds of the planet Skaro. They fought the Time Lordsin the Last Great Time War, ending in the near-total destruction of both races. The Daleks were hated and feared throughout time and space. They were the oldest and most frequent foes of the Doctor, having faced him several times in every one of his incarnations. 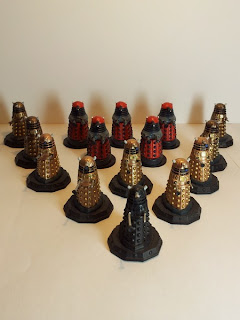 In the background some Red 'drone' Daleks of the New Dalek Paradigm. This was an empire of purebred Daleks created by a Progenitor device, which made use of original Dalek DNA. The Progenitor was activated by the only three surviving Daleks of the previous empire, themselves "unclean" specimens since they were generated from the cells of Davros. The original five Daleks of the New Paradigm, and the leadership class once their new empire was created, were more powerful and much larger than any of their predecessors. 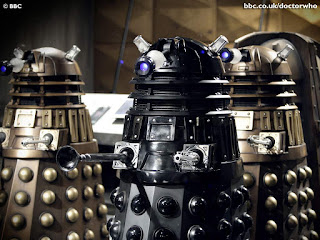 At the front we have gold Daleks led by a single black Dalek. These are essentially based on the 'Cult of Skaro' Daleks, (but more of 'em...)

I still have a veritable horde of Black Tree Daleks to paint and these will likely be more of a classic look.

Great set if monsters there - Silurians are definitely among my favourites.

Wish I'd never sold on my Bok - I had Azal too - but needed the cash for other projects...

Just been painting a small horde of Haemavores led by the Ancient One myself - and finally got round to the 7th Doctor and Ace!

Dalek, Robotmen and Ogryns for me, post Dalek invasion London and a small resistance cell...