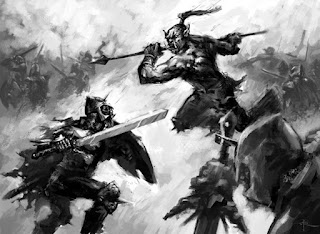 This time a selection of my old Orcs. I am almost ashamed to say but back in the day I was less worried about painting every single miniature I bought before they got to see the table so most of these brutes would have seen some combat!

Having said that, some of these chaps did get a lick of paint and considering how old they are (I am much more careful with my painting now) they still hold up to a reasonable tabletop standard...just. Perhaps a little bit of work on them and some new bases? 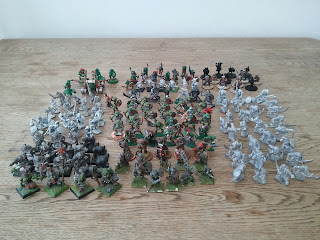 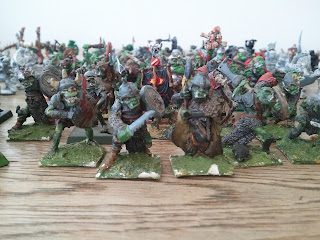 Above: These are some of the really early Citadel Citadel FTO Fantasy Tribe Orcs, later known as C15 Armoured Orcs and C16 Orcs. Really like the one in the middle with the serrated sword and shield. 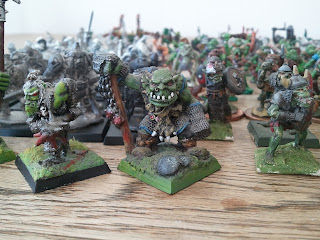 Can't remember the manufacturer of the above but he is a great looking mini. Really mean looking and not a bad paint job either! 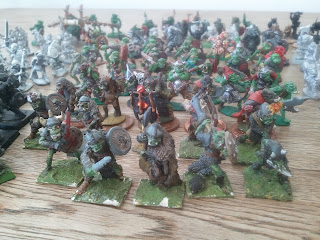 Orc warriors prepare for a rumble. Harboth lurks in the background.

In the pic above you can just about see Harboth and some of his Black Mountain Boys. These were one of the first of the Regiments of Reknown sets and I managed to get them all apart from the champion figure who I believe was released later as a slotta-base figure. 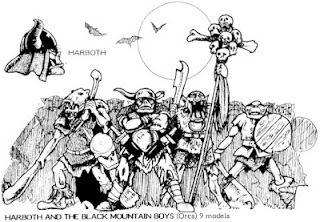 Harboth and the Black Mountain Boys.

I particularly like the standard bearer and his 'pole with some skulls on it' - none of this flashy flags stuff for Harboth and the lads! 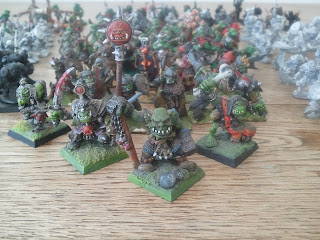 Garag and his entourage. 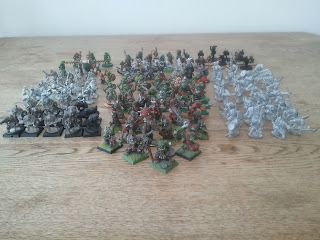 Another shot of the army.

In the shot above you can see the different ranges and manufacturers - front left are some Black Orcs and Hobgoblins from the Chronicle range by Nick Lund. Behind them are some Citadel Half-Orcs. Next are some early Grenadier Orcs from the Battle Lords set 'Army of the Black River'. At the back is the Citadel Man Mangler. In the centre are a selection C15, C16 and other Citadel Orcs, some on slotta-bases (my last purchases) and at the rear are a handful of old Citadel Goblins. To the right of the picture are a horde of Grenadier 'Fantasy Warrior' Orcs and behind them are the Goblin Raiding Party boxed set, which I have actually started to paint recently! 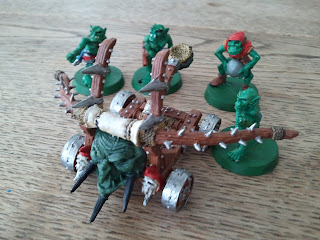 Above is the Orc Man Mangler from the early 90's, unfortunately missing a couple of crew. I am sure they can cope. 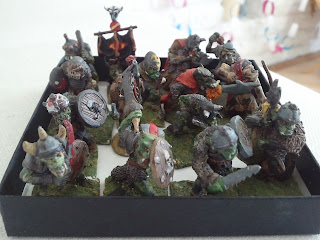 A last shot before being packed away again - time for Orcie bye-bye...

Figures are predominantly Citadel from across the years but the are also some from the Grenadier and Chronicle ranges, possibly some from Asgard with a couple more from who knows where.

Really nice, love the old school minis they are timeless.