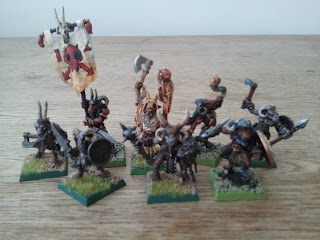 By Tuomas Pirenen,
as appeared in Empire in Flames
& Annual 2002 Errata.

Beastmen are brutish creatures, the Children of Chaos and Old Night. They roam the great forests of the Old World, and are amongst the most bitter enemies of mankind. The raging power of Chaos has given them a ferocious vitality which makes them shrug off ghastly wounds and carry on fighting regardless of the consequences. Even the Orcs are comparatively vulnerable to damage compared to the awesome vitality of the Beastmen.

Beastmen are a crossbreed between men and animals, usually resulting in the horned head of a goat, though many other variations are also known to exist. The Beastmen are divided into to two distinct breeds: Ungors, who are more numerous, twisted creatures that combine the worst qualities of man and beast, and Gors, a giant breed of Beastmen, a mix between some powerful animal and man.

The Ungor are smaller Beastmen, who cannot compete with Gors in strength and power. They may have one horn or many, but these won’t be recognized as those of goat. Shamans are very special Beastmen and are revered by all Beastmen, for they are the prophets and servants of Chaos Powers.

Each warband of Beastmen includes a mix of some Bestigor, Gor warriors and Ungor who are the mainstay of the tribes. Seven great Herdstones stand hidden in the forests surrounding the city of Mordheim. From there the Beastmen warbands come to raid the city: Warherd of Thulak, Headtakers of Gorlord Zharak, the Horned Ones of Krazak Gore, and many others.

The shards of the meteorite are seen as holy objects, which can be sold to the powerful Beastlords and revered Shamans in exchange for new weapons and services of warriors. For the tribes of Beastmen the battles fought in Mordheim are part of a great religious war, an effort to bring down the civilization of man which offends the Chaos Gods. After the taint of man has been wiped from the face of the earth then the Beastmen shall inherit.

Appearance: Beastmen Gors stand some six-seven feet tall, and their heavily muscled bodies are covered with fur. Ungor are lesser beastmen, no larger than humans, but their tough bodies and vicious tempers easily make them a match to any human warrior.

Beastmen wear little clothing, but often dress in the fur of their defeated rivals. They usually carry the skulls of their vanquished enemies as these are thought to bring good luck. While most Beastmen have dark brown skin and fur, black-furred or even albino Beastmen are not unknown. Beastmen wear heavy armlets and necklaces which serve as armor as well as decoration. Apart from the most primitive clubs and wooden shields, the Beastmen make few weapons. It is not the nature of Chaos to create, but to destroy.

A Beastman Warband must include a minimum of 3 models. You have 500 Gold Crowns which you can use to recruit your initial warband. The maximum number of warriors in the warband is 15, though some buildings in the warband’s encampment may increase this.

Beastmen are fearsome creatures of Chaos that do not interact with other races other than in war. A Beastmen warband may never hire any Hired Sword unless specifically stated with the Hired Sword.

1 Beastman Chieftain; 65 gold crowns to hire
Beastman chieftains have gained their position through sheer brutality. He leads the Beastmen
to Mordheim to gather the Chaos Stones to his Herdstone.
Weapons/Armor: The Beastman Chieftain may be equipped with weapons and armor chosen from the Beastmen Equipment list.

Special Rules:
0-1 Beastman Shaman; 45 gold crowns to hire
Beastmen Shamans are prophets of the Dark Gods, and the most respected of all the Beastmen.
Weapons/Armor: Beastman Shamans may be equipped with weapons chosen from the Beastmen Equipment list except that they never wear armor.

Special Rules:
0-2 Bestigors; 45 gold crowns to hire
Bestigors are the largest type of Beastmen, the great horned warriors of the Beastman Warbands. They are massive creatures with an inhuman resistance of pain.
Weapons/Armor: Beastmen Gors may be equipped with weapons chosen from the Beastmen Equipment list.

0-1 Centigors; 80 gold crowns to hire
A Centigor is a disturbing cross between a horse or oxen and Beastman. Being quadruped grants them great strength and speed whilst their humanoid upper torsos allow them to wield weapons. These beast-centaurs are powerful creatures but are not particularly agile or dexterous.
Weapons/Armor: Beastmen Centigors may be equipped with weapons chosen from the Gor Equipment list.

Special Rules:
0+ Ungor; 25 gold crowns to hire
Ungor are the most numerous of the Beastmen. They are small, spiteful creatures, but dangerous in large masses.
Weapons/Armor: Ungor may be armed with weapons and armor chosen from Ungor Equipment list.

Special Rules:
0-5 Gor; 35 gold crowns to hire
Gor are nearly as numerous as Ungor but are larger and more brutish...
Weapons/Armor: Ungor may be armed with weapons and armor chosen from Beastmen Equipment list.

0-5 Warhounds of Chaos; 15 gold crowns to hire
Chaos Hounds are titanic, mastiff-like creatures which are insanely dangerous in combat.
Weapons/Armor: None! Apart from their fangs and nasty tempers the Chaos Hounds don’t have weapons and can fight without any penalties.

Special Rules:
0-1 Minotaur; 200 gold crowns to hire
Minotaurs are gigantic, bull-headed Beastmen. Fearsome and powerful, any Beastman Chief will try to recruit a Minotaur into his warband if possible.
Weapons/Armor: Minotaurs may be armed with weapons and armor chosen from Beastmen Equipment list.

Beastman Heroes may use the following Skill table instead of any of the standard Skill tables available to them.