Being a lazy modeller I have been after some reasonable looking wattle fencing and wanted to take the strain out of making it myself. I do have some 'home-made' fences but I wanted to check out a few of the companies that made some. 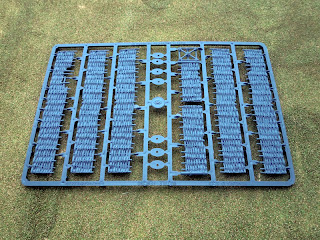 Above we have Renedra, who seem the obvious first choice, with their nice straightforward looking plastic offering, reasonably priced at £6 a frame. Each frame consists of 5 sections each 124mm long and 2 sections of 60mm long plus a gate. I thinks its also available from Gripping Beast for £4.50! Having seen this 'in the flesh' I have to say it looks pretty good painted, if a tad small in height.

Next is the 'hurdle fencing' from Hovels Ltd. Can't really comment as I have not actually seen this but it looks reasonable in the pictures.

Above we have the wattle fence offering from Irregular Miniatures. This looks fairly good painted and is very cheap at £3.50 for 5x1" pieces. 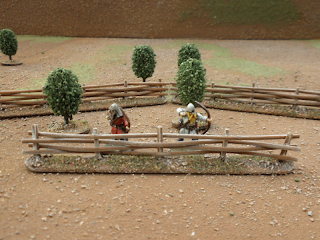 Next is the WTFE01 Wattle Fence from Products for Wargamers. This is a very reasonable £1.50 for a ready to use approximately 6" strip. Not quite as detailed as some but I am sure the two Vikings hiding behind it don't really care too much. 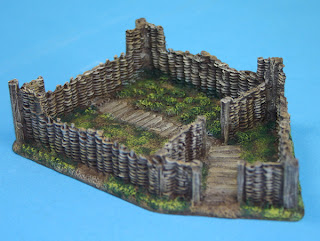 At the other end of the scale we have the wonderful work of the folk over at Grand Manner. The large wattle pen above comes in at £12.70 for the unpainted and a whopping £25.40 for the painted version. Having said that, like all their products, its pretty sweet... 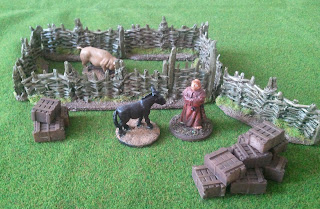 
Finally and by pure fluke, I came across Dreamholme Scenics (see what they did there) who provide a nice 6 piece set of fencing,  for £6 unpainted or £11 painted. I ordered some of the painted fencing right off the bat as I like the look of a few of their other items so thought I would test them out with this. I must say I am very pleased - quick delivery, well packaged and a nice paint job, perfect for a lazy chap like me!

Also in the picture above is a set of crates from p.m.c. games, again pre-painted and nice and cheap from their ebay shop.

Any other suggestions??
Posted by wardy-la at 06:00