GoldenSpy - Episode 1: "Some of Our Plans are Missing..."


Mission:
Information gathering - Blueprints for a prototype 'WARMACHINE 2.0' have been stolen from a top lab at the 'Knowledge Array', part of Mili-Systems International and suppliers of tech to Department X. Agents from Department X are to enter the base and search for blueprint elements and other documents at defined locations identified by earlier intel. Security levels are low at the target location - Agent Zeta has used small knockout gas canisters in a previous fly-by to incapacitate the onsite security. This should be a 'walk in - walk out' affair.

Unbeknownst to the General and Pandora, the quick thinking of one of the (now unconscious) security guards has alerted the owners of Red Falls Tech to the possible intrusion. Lady Jane Winstanley, an 'associate' of the owners has brought four armed 'eavies with her to check on the warehouse site for unwanted snoops.
(Objective - stop the intruders leaving with anything they shouldn't)

General Gordon and Pandora's plan is simple - enter via the now unmanned front entrance and quickly check each specified location for evidence of the blueprints. Pandora will collect the information whilst Gordon is to provide the support (as he is not as nimble as he used to be) - once all information has been found, the Department X operatives will leave by either front (via the main entrance) or through a damaged part of the outer wall further into the compound. From here they will meet with Agent Zeta at a pre-defined pick up point. 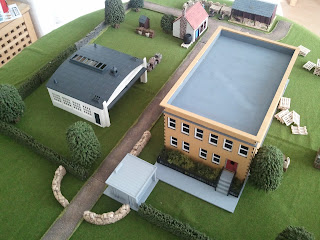 Lady Winstanley walks into the main compound area with Marvin and Boris in tow. At this point, they are unsure what to expect - a garbled message from a security guard suggests a problem...but maybe he is just drunk? She orders Marvin to follow her to investigate the main warehouse while Boris checks the Range Rover. Henry and Jacques have already taken up position behind the engineers shed. 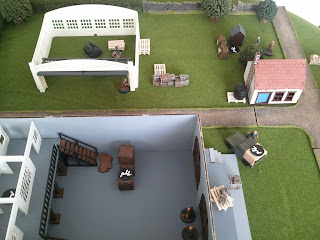 Pandora uncovers the first clue - a pile of documents carelessly left on a stack of crates. Fortunately the SecuriDrone behind her is currently out of commission. General Gordon has only just managed to keep up with the light-footed Ms. King! He positions himself with a good vantage point overlooking the North of the compound. 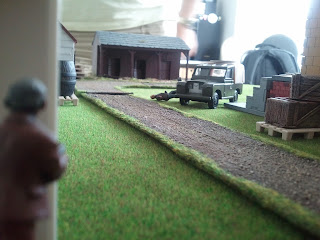 He immediately spots the suddenly aware Boris, loitering behind the Range Rover and raising his pistol to shoot the old army man! Fortunately his shot is well off target - General Gordon's reply is not so forgiving...a second shot rings out and poor Boris slumps to the ground! 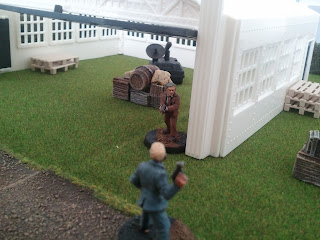 Chaos ensues in the compound but nobody is sure what is going on. Alerted to the danger, Henry takes cover behind some nearby crates and draws his handgun. The brave (or should that be foolish?) Jacques springs forward, stopping only feet from General Gordon and drawing his gun!! Could this be it for the old veteran? 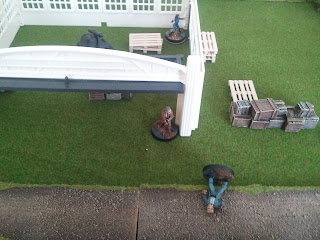 With lightning reactions that defy his apparent age, the tough old military man quickly spins round and fires his second shot in anger...the overconfident Jacques has no time to react - the besuited 'eavy drops to the floor with a surprised look on his face. 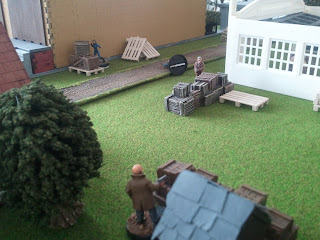 Ms. King light-footedly glides across the pathway and ducks behind a pallet of crates spotting Henry as he pops his head up to see what has happened to Jacques. Gordon, the ever professional soldier, slips from the building and takes up another position behind a large pile of boxes to give Pandora cover. Henry takes a shot at Gordon but to no avail. 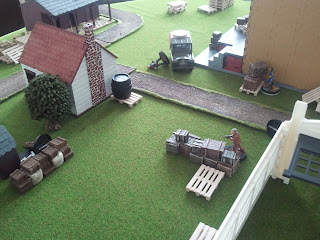 Unfortunately for Henry, he has left himself too exposed. With marksman like precision, Gordon fires his third shot of the encounter and the third 'eavy falls back down behind his hiding place! Pandora uses the opportunity to dash over to the Range Rover and pick up the second set of documents. 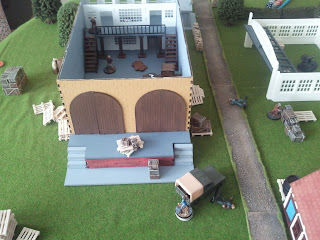 Meanwhile, Lady Winstanley and Marvin have been searching the front of the main warehouse building - hearing the shots they turn around and head back the way they came... 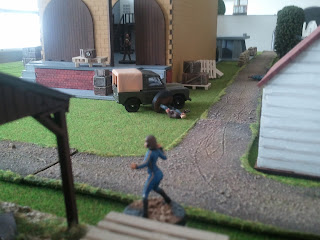 Lady Winstanley reaches the main rear doors of the warehouse and swings one open - she has just enough time to spot a lithe cat-suited form slip across the compound in the distance.
Pandora manages to pick up a third set of paperwork, then disappears into cover again. 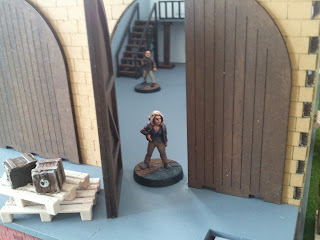 As Lady Winstanley steps through the door she spots General Gordon, who has tried to take cover behind and old water butt by the engineers shed opposite... 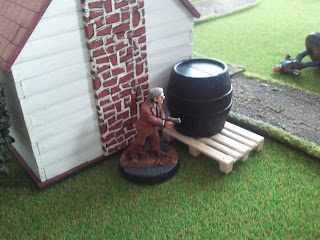 General Gordon's reactions let him down for the first time - he fails to notice the aristocratic servant of evil as she draws her poison blow pipe! 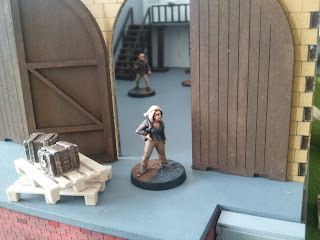 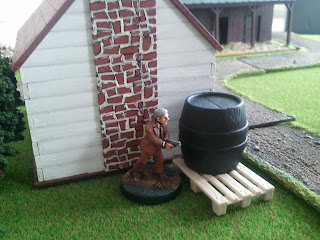 The first General Gordon is aware he has been spotted is when the dart thuds into his exposed arm. Without so much as a whince, he plucks the dart from himself and throws it to the floor. Despite this, he staggers slightly as the poison takes effect - time to leave perhaps? 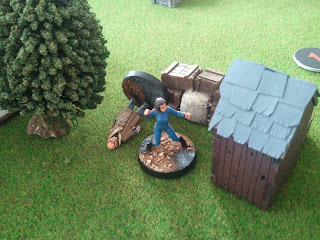 Knowing that the General has been hurt, Ms. King manages to find a fourth set of documents in a nearby tool shed. Unaware of what forces they may soon be up against, she calls out to Gordon, then both Pandora and the General decide that discretion is the better part of valour. 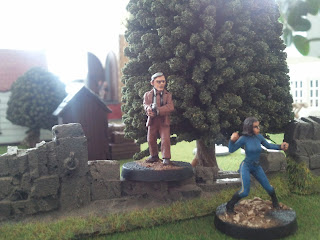 Fortunately the scouting mission performed earlier by Agent Zeta proves worthwhile and the two Department X agents move as quickly as they can (essentially a slow trot in Gordon's case) to a nearby breach in the compound wall. Pandora has to help the gruff old soldier over the wall, he is still a little groggy from the blowpipe dart and the war wound does nothing to help. 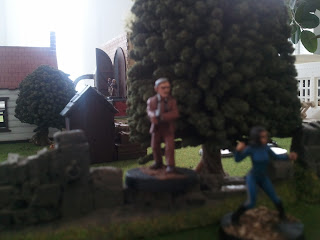 Lady Winstanley and Marvin watch helpless as the X Operatives escape - in a not so 'ladylike' moment, she is heard to utter the word "Curses!!" (or something similar) - there is little they can do as King and Gordon flee into the treeline. Lady Winstanley is determined her next meeting with the lovely Ms. King and General Gordon will not be so brief... 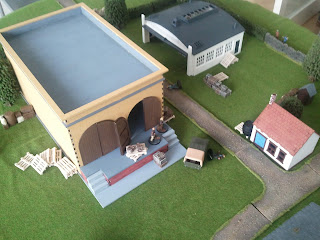 The closing shot of the episode. 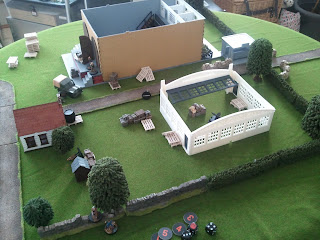 Our first 'proper' game of 7TV, Rob took on the Department X agents an I took control of the Red Falls Tech folk. We decided on using a couple of big name Guest Co-Stars, General Gordon and Ms. King, for this game as it seemed it would be good to see the General in a more starring role. Lady Jane Winstanley was put in charge of the Red Falls Tech team and we based her profile on Kali (of S.H.I.V.A.). The scenario was loosely based on the 'Gather' episode, with Dept. X needing collect as many objective markers as possible and Red Falls just having to stop them. Points would be awarded as regards to casualties and what was taken off the table and what was left. We decided on no event cards or gadgets to keep things simple.

It was a quick and smooth game that saw the General pretty much run riot through the compound while Ms. King busied herself collecting the objective markers. Rob really pulled out the die-rolls in this episode - three shots and three downed 'eavies showed how devastating Gordon can be! The poor goons didn't stand a chance. Lady Winstanley essentially took the wrong direction at the start of the game and subsequently found herself playing catch-up to Gordon and Ms. King as they merrily collected documents and put down the guards. Her one interaction with them resulted in a wound for Gordon - on his next turn Rob decided they had collected enough information and they fled the scene. 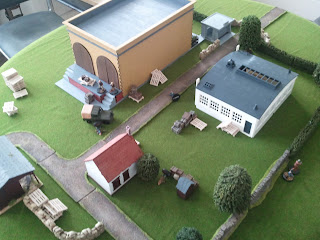 Department X: 5 (3 points for downed baddies plus 2 for collecting 13 points of objective markers)

Red Falls: 1 (for keeping 8 points of objective markers on the table) 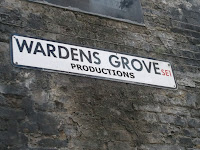 Figures are Crooked Dice, Artizan and Copplestone. Warehouse and shed are Sarissa. Hangar building is Plasticville. Shack is from Warbases.
Posted by wardy-la at 12:19

Nice game report, the terrain looks great. Nice idea to use the not 'Ms Galore' fig in that role I'd not thought of it myself!

What do you think of the Action engine?

She is a great figure (in both senses of the word) and every gaming table should have at least one!
Not played it much but so far I quite like the 7TV system - pretty simple to get the basics and lots of scope to modify characters, add gadgets, events etc. I really enjoy the Doctor Who Miniatures Game too so it was an easy transition :)
Mark

King and Gordon made a really good team, the secret was to keep them together allowing King to move on Gordon's leadership ability and so saving the audience participation counters for Gordons shooting. Had time allowed they would have had the rest of the those blueprints. Good game.