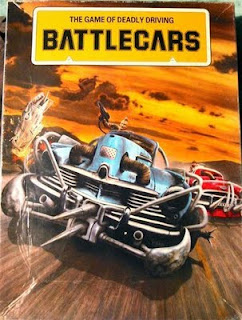 Battlecars - The Game of Deadly Driving.

We were missing two players for our usual Wednesday RPG session so we decided to go old school and dig out a retro boardgame. The Judge Dredd boardgame, Aliens boardgame and Battlecars made the shortlist - Battlecars won out! We decided on a fairly free interpretation of the rules as it was just for fun. I took the Green Team, Rob was Blue Team and Andrew Red Team. 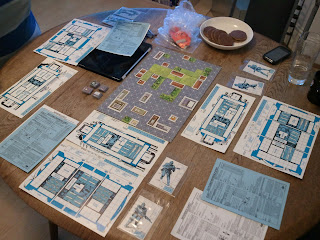 We agreed to go for one car and one bike each, randomly drawn from the set. Rob and Andrew picked up pretty similar options but I managed to get the equivalent of the 'rickety chair', the car with two machine gun turrets! Pah! We stocked up on MG bullets, Shells, Flamethrowers and Rocket Launchers with no limitations (we allowed Rockets in the bikes!) and Andrew and Rob both grabbed a few mines as well. 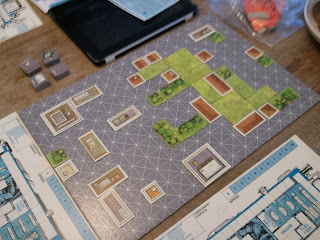 For the map layout we went with a random selection with half the board 'residential' and the other half 'industrial'. It had little bearing in the game and the 'residential' part only saw my bike ride through it in the initial couple of turns. With random entry points and a made up on the spot initiative system we all ended up entering in roughly the bottom left corner apart from my bike that had to motor over grass for a bit before he could join the action. 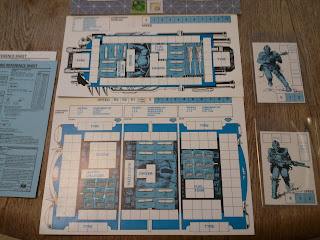 The action kicked off really quickly with my car driving past Andrews bike and both taking pot shots at each other. My thin side armour got me in trouble almost immediately and took internal damage from the first shot - luckily my shell didn't explode! Andrews bike took some minor front armour damage which was soon added to by and attack from Rob. This was to prove devastating for Andrew later in the game. 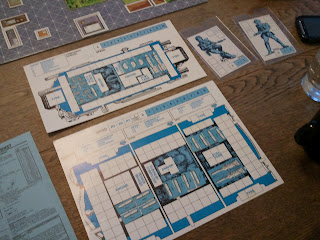 Robs car and bike selection. Look at that armour on the car!

As Robs car drove around aimlessly for a bit and my bike sped in to get to the combat I did a u-turn in the car and shot up to 'ramming' speed - I fired off a round of MG bullets and in a shot slammed my car into the side of Andrews bike. My heavy front armour could take the impact no problem but Andrews flimsy side armour started to look even flimsier! 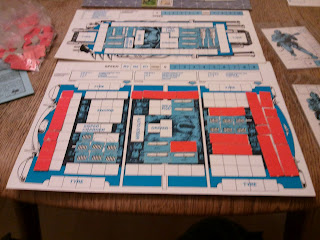 My car took another hit in the rear armour which was to prove pretty deadly in the next turn. With Andrews bike on its side he decided to retaliate and immediately sped his car right up to my rear bumper and let rip with a MG burst followed by a Rocket! With him maxing out his damage and rolling lucky on the internal damage I took six hits to my fuel tank. No fire extinguisher = no more car. BOOM! Strike one to the red team. 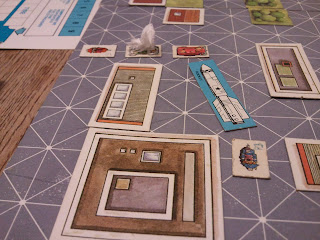 Blue Team Rocket attack on Andrews car. My car is a burning wreck!


By focusing on each other we had both forgotten about Rob - as he sped past on his bike he let rip with a Rocket and massively damaged Andrews car. With very little armour on the front-right side he started to take damage to his engine, resulting in his maximum speed being reduced to '1'! 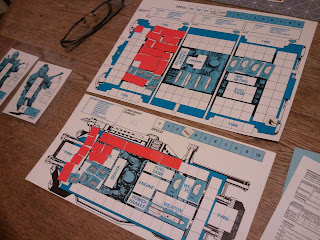 Andrews bike and car looking in a bad way already...

Getting his bike upright again Andrew sped down to the bottom left of the board, possibly to get behind Robs bike. Rob had spotted it and maxed out his speed resulting in a head on collision with the red bike. 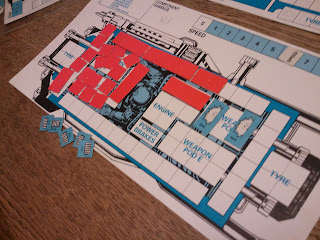 Rob rolled a massive 14 damage but his bike just about soaked it up. With no front armour already it was a different story for Andrew. His second weapons pod took a hit followed by the fuel tank and the driver - no matter the  bike erupted in a ball of flame anyway. BOOM! No chance. Strike two to the Blue Team. 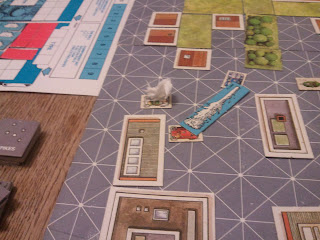 My bike finally arrived in the action and added to Team Reds woes by shelling his car on a drive by. Team Blue was next to take a shot and flamed the poor Red car that was trying to reposition to get some more protection. 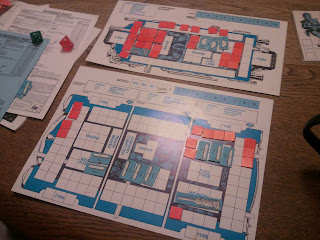 Blue Teams bike looking a mess but the car is having no problems...

As Robs Blue car appeared I was able to get a Flame shot into Robs rear but it didn't have much of an effect. His return fire with a shell into my front (where I now had no armour) luckily only went through the bike into one of my weapon pods. I managed to get off one more shot doing a fairly decent whack to Robs bike leaving him with no right side armour. 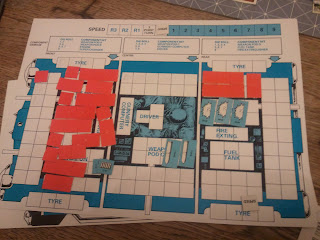 A final parting shot from Robs Blue car finally put Andrews car out of the fight. With no engine, the driver deemed it was best to bail out and put it all down to experience! Jumping out of the wreck he ran across to the nearby building and laid low until it was safe to run off. 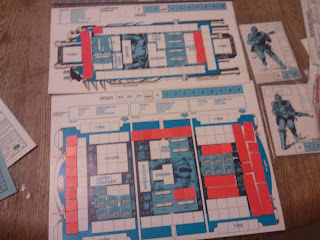 Surveying the wreckage - one burnt out car, one burnt out bike, one immobilised car - we looked at the condition of those still in the fight. My bike just simply didn't have the firepower to take out Robs surviving bike and almost untouched car. Remembering he had forgotten to switch the telly off, the rider sped off home while he could...

All in all we had a great time playing this classic. We speed read the rules and added a couple of things on the fly but in all this game really stands the test of time. Now, where did I put my Car Wars stuff...

You forgot to mention that my car driver escaped on foot unharmed, unlike yours....

ZM - Updated to keep the ZM happy - you don't want to go around upsetting a Zombie Master do you. There are already two more burning corpses in the wreckage to join his growing army of zombie minions...

Thantsants - yes mate, highly recommend it. Great fun game and we all thought it holds up pretty well.