Played an impromptu Warhammer 40k battle and thought I would post a few pics. This is actually the first time I have played 40k (the other players are all 'veteran') but I enjoyed the game and the carnage that took place!

The Battle of Glenmore Gulch centred around the discovery of an ancient Terra Artefact discovered in the ruin of a long lost city known as Glenmore. Four opposing forces (Orks, Ultramarines, Renegade Marines and Tyranid) met on the desolate battlefield that was to become known as 'Glenmore Gulch' from that day onwards...

The Tyranids were the first to arrive and half their force led by a Carnifex moved quickly to the small valley where the ancient tek lay. 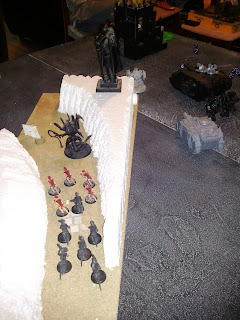 Tyranids in the Gulch.
An Ultramarine 'Devastator' unit dropped to a nearby high building to the north-west of the battleground an set up a defensive perimeter. The Tyranids were quick to notice and immediatelly attacked with a Hormagaunt horde with a Trygon and Raveners. 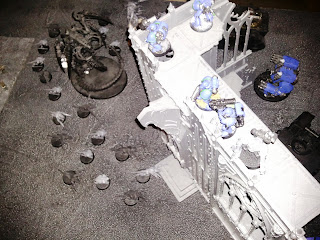 Ultramarine Devastators set up position as the hive approaches. 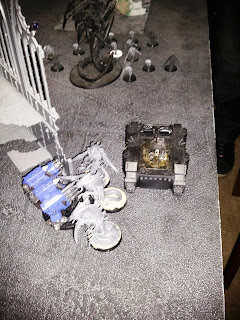 Raveners attack Brother Howard in the Ironclad Dreadnought.
﻿
Meanwhile at the other end of the battlefield Renegades had arrived and began to assault the Ork scout force assembling nearby. Rumour had it these Boyz were being led by Boss Zagstruck but he was nowhere to be seen. 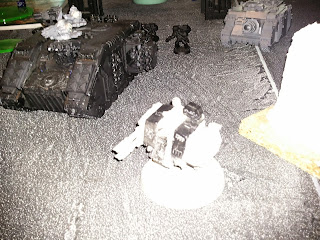 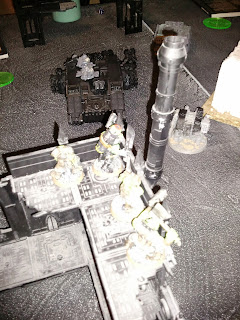 Da Boyz look on at the oncoming enemy...
﻿
Back on the other side of the Gulch, as the battle continued between the Ultramarines and Tyranids, a Genestealer Brood, led by a Broodlord, appeared behind the Marines defensive position! The Trygon made short work of the Ironclad Dreadnought. Brother Howard shall be remembered for his bravery. 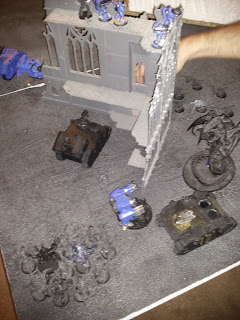 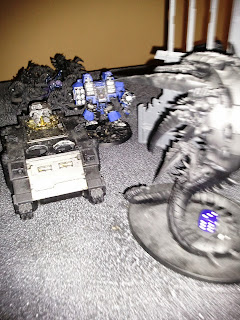 The Trygon attacks.
The Genestealer Brood quickly rushed forward,﻿ making short work of the Ultramarine Whirlwind and Land Speeder that had been decimating the Tyranid Hormagaunts. 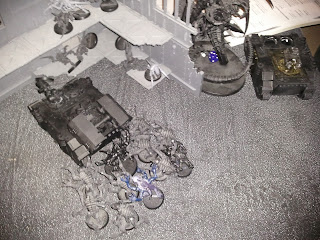 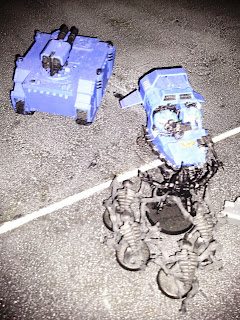 ...and the Land Speeder quickly follows.
﻿In desperation, Captain Danziger an his squad disembark their transport to face the oncoming Genestealer horde like true 'Battle Brothers' shoulder to shoulder and face to face with the enemy... 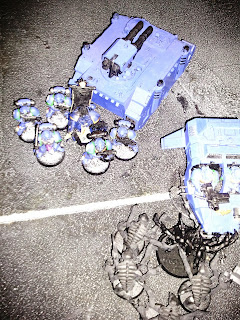 Captain Danziger and troops disembark.
Back on the other side of the field, as the Renegade Marines began their confident advance, destroying the building they were assaulting and killing many of the Orks within - Boss Zagstruck suddenly appeared from the darkened skies to wreak terrible damage on the Land Raider! All Renegades opened up on the Boss and his Boyz wiping them out. The joy was to be short lived as a huge Ork Battlewagon rolled up in close range to the Renegades right. 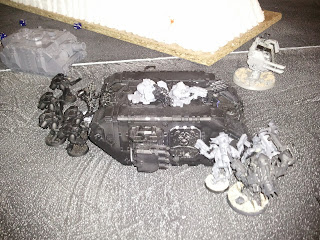 The Land Raider is crippled by the Boss. 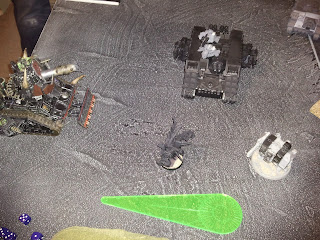 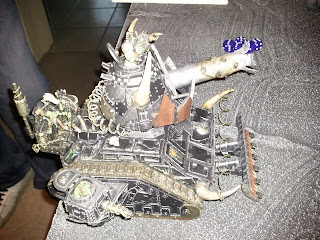 The 'Fearsum Enjin'.
﻿The Ultramarines were faring badly at this point - many of their vehicles lay in ruins and several Marines were dead. The Grenestealers and Broodlord were relentless in their attacks on Captain Danziger and though they fought bravely, eventually they fell to the merciless blows of the Broodlord. They died in glory! In an apparently foolhardy moment, a unit of Marines under Sergeant Lackland crawled from the wreckage of their transport to meet the Trygon head on...and succeeded! Stories shall be written of this moment! Death of the Trygon.
The last working vehicle began to make a dash for the Gulch - the Artefact was near...as they sped towards it from out of nowhere another Ork Battlewagon slammed into the side of the Razorback causing it to explode! 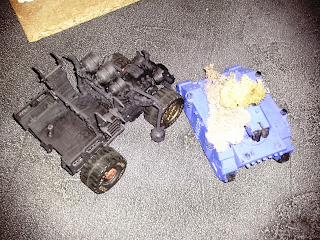 The second Ork Battlewagon appears!
The Ultramarines were now effectively out of the fight. The remaining three forces continued various actions across the battlefield. The Carnifex and its troops fought off a stinging assault by the Renegade Marines and stood within meters of the ancient Artefact. 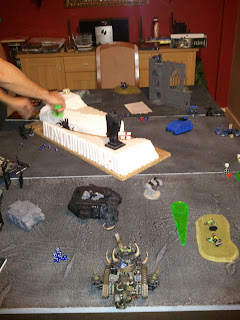 View of the Gulch.
﻿The Orks continued with their 'ram into everything' tactics and the 'Fearsum Enjin' rocked into the immobilised Land Raider. The Renegade Marines on board quickly disembarked to join battle with the Ork Boys that had begun to pile onto the battlefield... 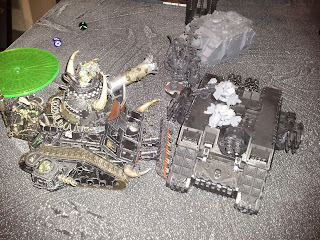 The Raider is destroyed! 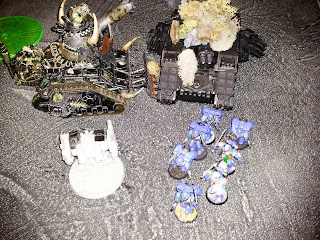 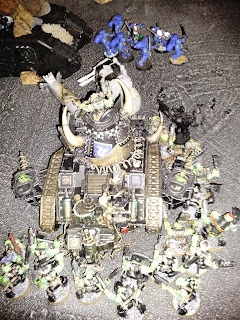 Boyz leap from the 'Fearsum Enjin'... 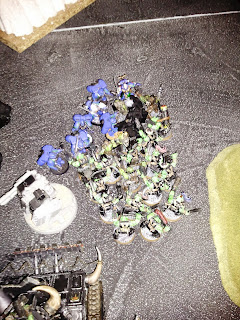 ...and battle is joined! 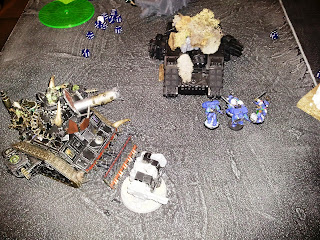 The Renegades are victorious - but at what cost?
Whilst this battle raged the second Ork Battlewagon moved to the edge of the Gulch and the Boyz onboard (very drunk by this point) piled out and ran towards the Artefact. The only resistance to meet them was a horribly wounded Carnifex that they soon put out of its misery and this also provided dinner for that night too.﻿ 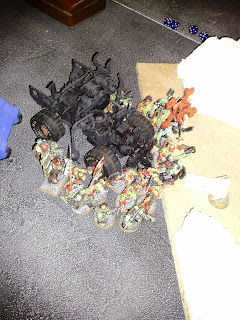 Orks at the mouth of the Gulch. 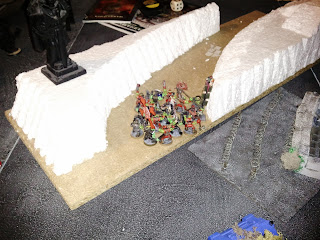 The Boyz celebrate around the Artefact.
Little more could be done. Most forces had been decimated and the survivors retreated from the field. The Orks held the Artefact but didn't know what to do with it﻿ so they just used it to spit roast the Carnifex carcass...yummy!
In all a good fun game. We essentially played it as an 'annihilation' scenario with extra points for holding the Artefact at the end of the game. The Tyranid force did well and would have won on the sheer carnage it caused but the late arriving Ork Boyz managed to squeeze a draw by getting the Artefact. The Renegade Marines fared well but had to split their forces as they had few Orks to fight initially and the Tyranids were making progress to their side. They were best placed to stop the Orks but by then it was too late. The Ultramarines began okay but ultimately fell to the Tyranid assault.
Posted by wardy-la at 12:54