Finally managed to track down the identity of the 'mystery figure' - was looking at the Mega-Minis site as suggested by Jagatai (thankyou) and in a round about way decided I was looking for a Barbarian of some sort. To cut a long story short I found the Lost Minis website and searched for 'Barbarians' - first thing that came up was the 'Barbarian Personalities' set from Asgard, sculpted by Jes Goodwin (who did lots of Citadel stuff) and though there wasn't a picture I deduced he was 'BP8 Aurock Storrirkin' - Stuff of Legends fortunately had pic and confirmed this: 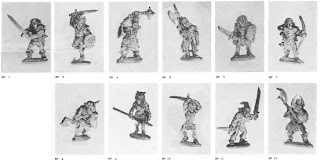 He is the one on the bottom left. Don't know why this bothered me so much but I was on a mission to find out - I am usually pretty good at identifying old minis and was determined to track this one down! Thanks for the suggestions guys.
Posted by wardy-la at 00:57

Come and join the rest of us on the Asgard Miniatures Facebook Group. Loads of old school hobbyists (and new) along with any of the sculptors.

Great. I'm not an admin there but hopefully Mark will add you on.