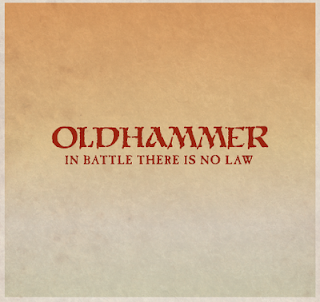 I have recently been re-developing my interest in fantasy miniatures and wargaming and through painting various old figures from my age old collection from the 80's (predominantly with Runequest in mind) I have started to come back to the idea of playing some fantasy skirmishes using rules I already own. We have discussed Mordheim, a set of rules I possess but have never actually played and this looks likely to happen at some point, after we have reached saturation point with other ongoing projects! Mordheim still interests me as it is a smaller scale skirmish, scenario and story driven game and you can follow and improve your warband and characters as they move through their battles and adventures.

Following on from this, I recently started following the blogs of Zhu, Thansants "Somewhere the tea's getting cold" and Gaj's "Warhammer for Adults" and been inspired to dig out all my old Warhammer Fantasy Battle rules, notes and scenarios. 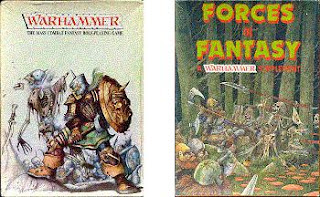 I liked the clunky 1st Edition and its massive army supplement "Forces of Fantasy" but I have to say its the 2nd or 3rd Edition all the way for me! I read the 4th Edition but I never even really liked it much and to be honest I had drifted away from the hobby by then. I didn't even touch the 5th to 7th Editions. I have looked at the 8th and I guess I wouldn't mind having a look at '9th' whenever that may appear but the whole GW WHFB thing now seems to be very army building specific and slightly rules heavy. It seems you have to have the (expensive) rule book plus several 'army' books to be able to play. In my day the army 'lists' used to be in one book! 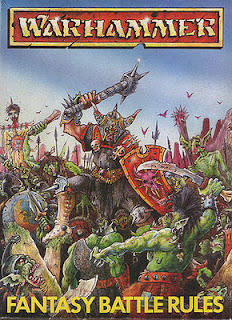 Personally, for me WHFB was always about small to large scale skirmishes, not neccessarily the mass battles that seem to be encouraged now. I really loved the slightly open feeling of the 2nd/3rd Editions. We used to play heavily story driven games that had little to do with points and army building and everything about the narrative behind the game itself. We had mixed troops in our battles, admitedly this was often down to the figures we had early on, but ultimately it came down to the scenario itself. 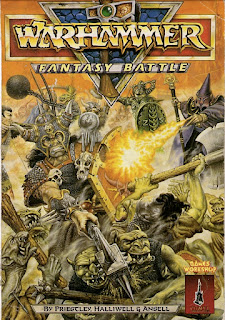 We had our own little part of the Warhammer world populated with characters and kingdoms that had a reason for fighting. The background was there in the books, but there was plenty of scope for you to bring your own backstories and histories into the mix. Our stories began around the chronicles of King Jorick Stefel-Horowitz, also known as Vlard Stalinsky, and his succession to the throne of the Theldar Fief, as the 30th king of Theldar, Dathal, Hurgoland and Damask. Through diplomacy, consolidation and treachery he incited civil wars in his neighbouring Fiefs and overthrew his opponents. His massive new territory was renamed the Grenland Fiefs and he ruled over a prosperous and poweful nation for many years, handing down power through several generations. The Grenland Fiefs saw incursions from powerful sorcerers, demonic hordes, the Goblin Wars and even a campaign ending in a civil war as the ruling family, under King Sternjaw IV and his sons Prince Leopold Caprinski and Aramir 'Bresharde' Sibertine the Half-Elven, fought with their own traitorous kinsmen led by his nephew Elfwine Castaroff and a general of note Elstar Gorky, to retain the seat of power. 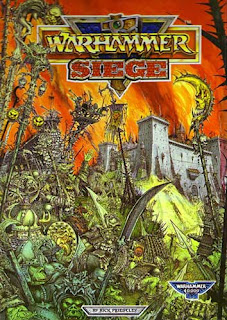 These epic stories were played out using the first three versions of the game and later supplements such as Warhammer Siege, and gave us some fantastic and memorable battles and kept us creative with the stories behind them. Perhaps it was just the way we played it, in "the spirit of the game" so to speak but with a little bit of history, some maps and an occasional 'RPG Lite' element to this we kept our little part of the Warhammer world alive for many years and it was fun to play through the trials and tribulations of a nation...
Posted by wardy-la at 03:14

That's a hell of a narrative you've got there, Mr Wardy-la! Those memories sound crystal clear - gives one a good idea of how much you enjoyed those gaming experiences. Lovely to see!