The Baboons are a species of intelligent monkeys that thrive in Prax. They consider the Monkey Ruins to be the capital of their mythical empire. They worship Grandfather Baboon, the Great Spirit of the Baboons. 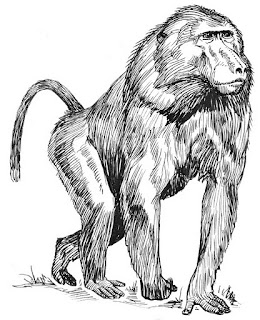 The Baboon family, a fully sentient race, use primitive tools and worship gods and spirits of the wilderness. They can be encountered anywhere ordinary baboons are found, but favour wastelands and chaparral. They frequently travel in troops of 15-20 and are lead by an Alpha Male, who mates with the fertile females, although group size can be up to several hundred. They are sexually dimorphic, with males being much larger and having brightly colored rears, genitals, and faces. 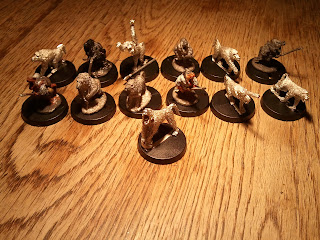 They worship their ancestors and make powerful shamans. They have a great fondness for horse flesh. They have large canines, and a powerful bite. Because they are unable to move well on less than three limbs, they tend only use one-handed weapons but some are able to utilise short spears with some practice. Their shoulders are not as flexible as a humans, and they can only use thrusting weapons, slings, and thrown weapons effectively. Typically, they carry slings and javelins or short spears. They are also quite capable of throwing rocks and other found items, and they frequently attack with spells. 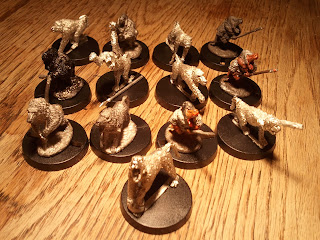 Baboon war party in the move.

Armorcast also do a small range of Baboons in the Lance & Laser 'HeroQuest' range, including a Baboon Shaman and a group of warrior types. You can get these (and the rest of the 'HeroQuest' range) in the UK at from Wayland Games.  At one point Ral Partha made a Baboon miniature but I would imagine you would have a hard time hunting one down now.

For some great pictures of painted Baboons check out Simon's blog at The Big Red Bat Cave, Rudi at Runequest Fun or Roderick's Light of Action. 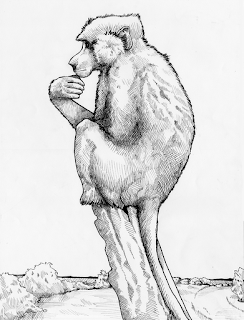 Rh'zzak contemplates the irony of life...
Posted by wardy-la at 18:23