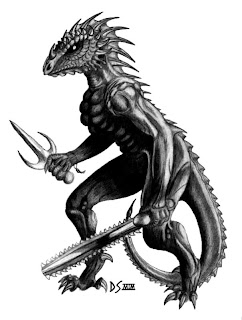 Dragonewts claim to be the eldest creatures, descendants of neotenic dragons from before the Dawn of Time. Even elven Green Age tales mention dragonewts. Dragonewts are peculiar creatures who continually reincarnate and metamorphose, ever-striving to achieve dragonhood. They are an enigmatic race, misunderstood and mistrusted.
Individual dragonewts trace descent from whatever dragon or dragons laid the initial clutch of eggs which resulted in their existence. Dragonewts of the same clutch call each other "egg-brother". They organize themselves into variously-sized settlement-nests.
Normal dragonewts are intended to be a race of mystery, alien and irrational to human understanding. Their language (Auld Wyrmish) includes visual, auditory, olfactory, and empathic components. But they are unconscious of their own language and cannot teach it, and because humans are not naturally empathic they can never gain more than a basic understanding of the language. Dragonewts have no written language, and have little need of one, as they are immortal, ever-reincarnating, and learn needed facts directly from other dragonewts.
Regular contact of normal dragonewts with outsiders is usually assigned to one individual in a group, who tries to act according to human expectations. It learns human languages, and learns to write or otherwise communicate ideas to humans. Sometimes it will own or be an interpreter dragonewt who has been surgically altered so that it can stumblingly speak human words. Altered interpreters may have guards, servants, and so on. Such dragonewts not infrequently become outlaws. When an outlaw dragonewt -- one who has ceased to believe in the dragon way -- dies, it is not reincarnated and never reappears. No one knows where its soul goes.
Some places in Glorantha have large colonies of deviant dragonewts, and they differ from the norm given here. But all of those variants have the same heritage. 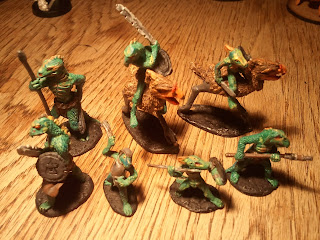 Dragonewts go through the following stages in their life cycle.
Scout Dragonewt: The scout (or crested) dragonewt is small, short-tailed, and has an arched crest upon the head. A vegetarian, it prefers leaves and fruit. Its betters will train it as a slinger to bring down birds and rabbits, and teach it the art of scouting and skirmishing, and to serve as a slave.
Warrior Dragonewt: The warrior (or beaked) dragonewt is larger than the scout stage, and is carnivorous. The tail now reaches to the ground, and at first the skin is covered both with scales and with small protrusions. They are most often found as hunters or guards of dragonewt nests.
Most warrior dragonewts ride upon creatures called demi-birds. Demi-birds are feathered, beaked, and lay eggs, but their bones are solid and they have vestigial arms, not wings. The demi-bird is fearless and carnivorous, adding to the fierceness of the dragonewt warrior.
Noble Dragonewt: Second-stage armor and natural weapons are, in the third stage, nearly replaced by frills, spines, wattles, pouches, and other decorative and communicative devices. Skin colors become more vivid, and the number and variety of scent glands increase. This stage is omnivorous.
A noble dragonewt will lead and represent; the stage is expert at living peacefully with the outside world. In some regions this stage is known s the 'tailed priest'.
Ruler Dragonewt: These rare dragonewts are almost never found outside their own nests. One is usually found in each small nest, and several in a town cluster. Their community functions, diet, and powers are unknown. The appearance of a ruler dragonewt (sometimes known as a 'full priest') resembles that of a noble, but they have wings.
Presumably, a ruler dragonewt meditates upon the secrets of dragonhood in preparation for the final metamorphosis. Such a dragonewt will, one day, awake to find itself a full dragon. It will then depart from its nest, to go to wherever dragons go.
Dragonet (Inhuman King, Fifth Stage): When a Ruler Dragonewt progresses fully, it will be reborn as a True Dragon and will be taken out of the Dragonewt Cycle. Sometimes, a Ruler will be reborn as a Dragonet, or neo-Dragon. This form is intermediate between Dragonewt and True Dragon.
There is only one Dragonet in a traditional Dragonewt society. While the Dragonet is alive, Dragonewts will be reborn as normal. However, if the Dragonet dies then there will be no rebirth until a new one is created. In this case, a Ruler which has progressed far enough to become a Dragon but has not chosen to will ceremonially kill itself and be reborn as a Dragonet, thus allowing the cycle to be restored. Although there is only one Dragonet in any society, there may be more than one alive throughout Glorantha. The Dragonewts of Dragon Pass have a Dragonet at Dragons Eye, but the Dragonewts of Kralorela have their own Dragonet. The Dragonewts of Ralios do not have a Dragonet, but if one were to be manifested, they could rejoin the Cycle.
Nobody knows the powers or abilities of a Dragonet. It is rumoured that one has all the powers of a True Dragon, able to think others to death and to shape the land with but a thought. 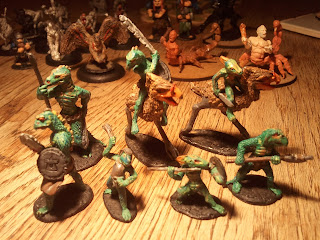 These are from the Citadel Runequest Boxed Set 5. A fairly quick paintjob but was pleased with the way the demi-birds turned out. The pic above shows (on the back row) a Full Priest Dragonewt (Ruler), a Beaked (Warrior) on a demi-bird, a Crested (Scout) riding a demi-bird, (front row) a Beaked (Warrior) with 'Klanth', a Newtling with sling, a Crested (Scout) with a javelin and finally a Tailed Priest (Noble). I have a few more of these yet to be painted. 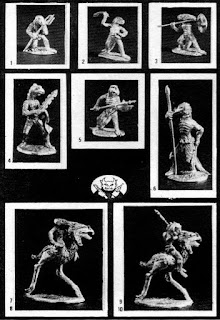 Armorcast/Lance & Laser also do a small Runequest/Heroquest range that includes a few Dragonewt miniatures such as Fighters, Scouts and demi-bird riders. 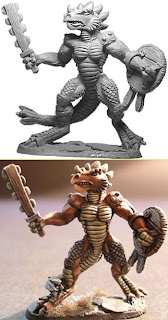 I would imagine you could use the various available 'Lizardmen' as Dragonewts, such as the wonderful Otherworld Miniatures Lizardmen Warriors. 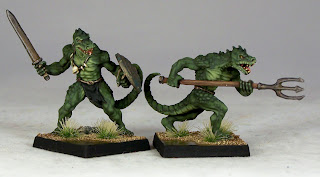 For more info on Dragonewts have a look at:
The Dragon Pantheon.

The History of Dragonewts by Simon Phipp.